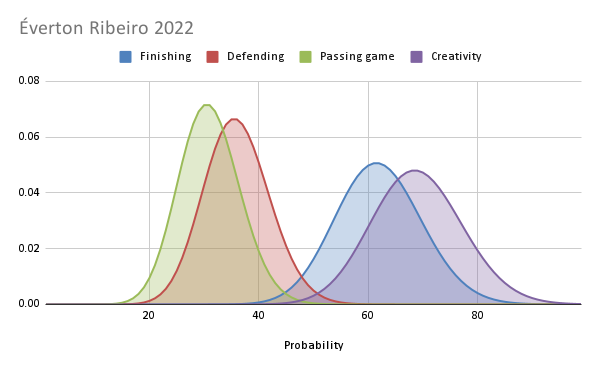 All data is subjective, no matter how hard proponents of objectivity try to make you think differently. Because all data is subjective a player has different stats for different teams. To think that one set of data describes a player for every team is a simplification that many people are happy to make, because they feel football is too complex without simplifications. FBM takes a different approach and embraces complexity.

For that reason FBM player stats are always the stats for that player only playing for a specific team in a specific league. Most of the time this is of course his current team, but one can also easily look back to see how a player has done in different teams in different leagues.

The basic principles of the FBM transfer model are:

Factors in the FBM transfer model

So factors that are used in the FBM transfer model are:

What the FBM transfer model does

The third and final step is that the predicted stats of the new player playing for the new team are boosted a bit more if his presence strengthens the team. This reflects that if his teammates are going to play with a better teammate, then they are going to improve as well which then is reflected back onto the new player. This way the right new player can lift a whole squad. Of course the opposite also happens. So if the predicted stats for the new player weakens the team, then his teammates are also dragged down a bit which then reflects back on the new player whose stats deteriorate a bit again. That is why hiring the wrong player is not only a financial problem, but also a sporting problem bigger than just the bad player.

There are two caveats:

When you represent a professional club or a player agent and you want a free sample FBM transfer report, fill in the form below so we will contact you to discuss which transfer you would like to see.